skip to main | skip to sidebar

Wednesday, Feb. 17, 2016 - Episcopal Church remembrance of Janani Luwum, Archbishop of Uganda, and Martyr, 1977  - Psalm 116:15 Precious in the sight of the Lord is the death of his faithful servants.

Late in Lent
I had planned a Saturday February 13 start to my Lenten blogging. I blogged for Lent a few years ago and thought it would be simple to do so again. But I did not really "count the cost" or think through how much my life and schedule has changed over the last two years. The last time I blogged for Lent, Anne and I were empty nesters, our grown children off on their own.  This time, we have been blessed with a niece and her three young children living with us.  And so, my musings and outlines sat and never materialized into my posts.

I considered dropping the whole thing, but decided better late than never. My posts were mostly my own Lenten work, meant to help me spiritually. If they also were helpful to others, thanks be to God.

So, better late than never, a week from Ash Wednesday, here goes.

Janani
I had never met anyone from Africa before. But my father, then the Episcopal Bishop of Guatemala, had invited a Bishop he'd met at the 1968 Lambeth Conference to come to Guatemala for a visit. When my brother Mark and I arrived home from high school that afternoon, we heard loud laughter, and a lilting English sounding accent. As we stepped into the house my father called from the living room, "Boys, come meet Bishop Luwum."

I don't know what we had expected, but it was not a towering, large man who wrung our hands, patted on the back and greeted us warmly. We were polite, and planned to exit to leave the two bishops to their conversation.  But it was not to be. Janani wanted to know about us, what we were studying, when  and where we planned to go to University.

Our answers were too short and quiet for his liking. "Speak up young men. Now tell me how you plan to serve God with your lives."

I can't speak for my brother Mark, but the last thing on my mind my sophomore year of school was anything with God in the job description.  So I mentioned that I liked archaeology, biology, and history, but didn't really see myself in a God kind of job.

"Well then," he said, "you must consider being a teacher, a missionary teacher. You boys need to seriously consider coming to Uganda and serve the Lord as missionaries. Perhaps God wants you there."  During the days he stayed with us, he kept urging us to take seriously how God might use us in many different ways.

My whole life as a preacher's kid I'd been dogged by peoples comments about following in my father's footsteps. By high school I had become immune to any consideration of them. But for some reason the intensity, personality, and fervor of this energetic apostle broke through some layer of resistance. I was fighting hard to put the wall back up, but in some small corner of my mind the thought that there might actually be a God, and not only that, the kind of God who did actually call people to do things, got a small foothold.

Just over 4 years later I found myself as a lay volunteer, in Houston doing evangelism and outreach from  inner city Episcopal church. Every once in a while I would think of how that African bishop had urged me to consider what God wanted me to do with my life.

In 1977 on a cold February day in Houston, the phone rang. One of my housemates called out, "Paul, it's for you, it's your mom."  When I answered I knew something was wrong. "Hey mom, what's up." "Honey, do you remember Bishop Luwum who stayed with us when we were in Guatemala?"  "Of course mom, Bishop Janani is a hard to forget!"  "Your dad got a call today. Apparently he was arrested by Idi Amin, and was tortured and murdered. We know that you've mentioned how he really made you think about what to do with your future and we wanted you to know so you could pray for him and his family and the Church in Uganda."

2002, Canturbury Cathedral, Kent, England
Touring the Cathedral, I went and knelt at the altar rail at the far eastern end of the building, noticing that it was now called The Chapel of the Saints and Martyrs of Our Own Time. After a brief prayer and a glance at the windows, I noticed a few feet over, a three ring binder on a string. I opened it at random and starting back at me was a black and white photo of Janani Luwum.

Unexpected tears sprang into my eyes. Tears of gratitude, and grief. Thankful for a faithful ;servant of God, willing to confront the evil of his time, Thankful for a few words spoken over 30 years earlier that got a foothold in my heart and mind. 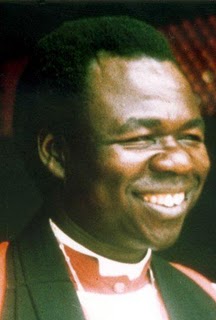