skip to main | skip to sidebar

Patrick, an Englishman, was captured and sold into slavery at age 16. At age 22, the year 412 he escaped and returned to his home and studied for the priesthood. And then in an amazing turn of events, about 435, he returned to Ireland, as a missionary bishop. Those six years captivity had led Patrick to seriously seek God.  And now he returned to Ireland, this time a slave to Christ.

He had come to love the Irish people despite their ill treatment of him. Over the rest of his life Patrick traveled vigorously about Ireland. It is estimated that he personally baptized over 300,000 people.

He also is the author of a wonderful Christian repudiation of slavery. His letter to Coroticus is an articulate and impassioned plea to abandon the buying and selling of human beings.

This past Fall, Anne and I got to listen to Somaly Mam, a Cambodian women who was sold into sexual slavery as a young girl. Like Patrick she managed to escape.  And she has used her new found freedom to forge a ministry to other young women helping many women to escape slavery and get the help they need.

I keep the picture of Anne and Somaly on my phone.  It reminds me that the battle to end slavery is still going on.

May we celebrate Patrick, give thanks for the work of those seeking to end slavery in our day,  and pray that the work of setting people free continues in our own day. Amen. 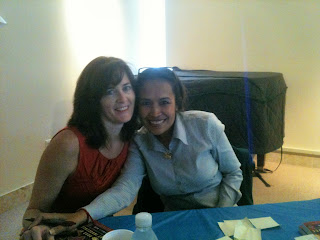